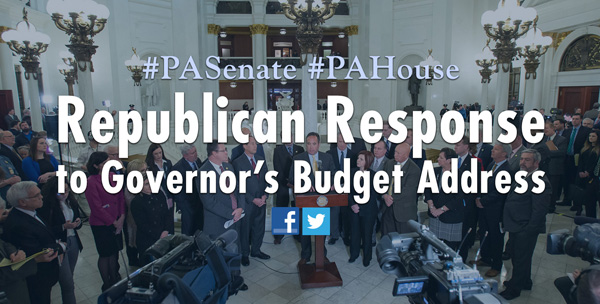 Responding to Governor Wolf’s budget address, Senate Republican leaders said they are encouraged that the proposal does not include broad-based tax increases. However, they are concerned about $1.5 billion in additional spending and more than a billion dollars in new borrowing in the governor’s proposal. They believe Pennsylvanians deserve a state budget that is fiscally responsible and sustainable.

Senate President Pro Tempore Joe Scarnati (R-25): “Senate Republicans remain committed to a budget that respects taxpayers while helping continue to foster job growth and economic development across our Commonwealth. Governor Wolf’s massive cut to school safety funding while wanting to spend over $1.5 billion more this year is immensely concerning. Ensuring that students and teachers feel safe in their learning environments is a crucial part of helping children to learn and succeed. I look forward to working with my colleagues to make sure the final 2020-2021 fiscal year budget addresses the needs of every area of our Commonwealth.”

Senate Majority Leader Jake Corman (R-34): “What we are seeing here is a regurgitation of many of the Governor’s same old policy proposals. This budget contains more than a half-a-billion dollars in tax increases on employers and other things that play to his base of supporters. We will start from the beginning and continue to unshackle employers from the unnecessary regulatory and tax burdens. As we go through this process, we will hold the governor to the policies that have led to record high wages and record low unemployment.”

Senate Appropriations Chair Pat Browne (R-16): “The Commonwealth has not been in this solid of a financial position in more than a decade. While this is certainly welcomed news, it is critical now, more than ever, that we remain fiscally disciplined and cautious when setting budget priorities and a FY 2020-21 spending number. The Governor’s budget proposal contains large spending increases over the previous year of 4.5 percent, which is well over the rate of inflation and considerably higher than previously enacted budget spending increases. That, coupled with a significant number of supplemental increases by the Governor, creates a risky financial profile for the future of the Commonwealth. This has the potential, if revenues fail to reach expectations and supplemental increases continue into the future, of greatly increasing the long-term structural imbalance of the Commonwealth’s finances. That is something the General Assembly, led by Senate Republicans, has worked extremely hard to reduce over the previous several years with conservative budgeting.”

Legislation to improve the oversight of prescriptions to reduce the risk of opioid abuse received final legislative approval this week and was sent to the Governor.

The bill includes a provision that requires an MCO to notify the Attorney General and the Department of Human Services if it is believed that a controlled substance was prescribed or dispensed fraudulently.

Other Bills sent to the Governor

The Senate on Tuesday approved legislation to establish a pilot program to integrate community-based services into Pennsylvania schools.

The program would connect students and their families with community-based organizations that address academic and nonacademic barriers to learning and provide support and case management services.  It would include access to medical and mental health services, tutoring, food and clothing, career and higher education planning, and employment.

Eligible schools would include those with low test rankings and a high percentage of low-income students.  They would be eligible for grants of up to $125,000 from the Department of Education to appoint a manager and a coordinator to implement community engagement plans.

Critical members of volunteer fire companies, ambulance corps and rescue squads who are injured in the line of duty would qualify for workers’ compensation coverage under a bill approved Monday by the Senate.

Senate Bill 94 would ensure coverage for all active volunteers and integral members of a volunteer fire, ambulance or rescue company insured through the State Workers Insurance Fund (SWIF). The legislation would apply to 1,550 volunteer fire companies and 92 ambulance organizations that are insured by SWIF.

The bill would only apply to active volunteers. Social members would not be included. The legislation is part of a broader focus by lawmakers on the challenges facing fire and EMS companies throughout the state. Senate Bill 94 now goes to the House of Representatives for consideration.

Senate Bill 309 would permit eligible Pennsylvanians to open special savings accounts and take state tax deductions for savings toward expenses such as a down payment and closing costs.

The bill would apply to first-time homebuyers and those who have not owned or purchased a home within the three years leading up to the purchase. Account holders would be permitted to contribute a total of $50,000 over a 10-year period. Annual contributions would be capped at $5,000 for single taxpayers and $10,000 for those filing a joint return.

The savings account program could result in an estimated annual increase of up to 4,000 home purchases in Pennsylvania.  The result would be an overall positive impact on Pennsylvania’s economy, spurring additional economic activity, job creation and earnings for households.

Other Bills sent to the House of Representatives

House Bill 1001 establishes standards for the licensure and regulation of human milk banks. The bill returns to the House for concurrence on Senate amendments.

House Bill 1100 establishes the Energy and Fertilizer Manufacturing Tax Credit program. The bill returns to the House for concurrence on Senate amendments.

Senate Bill 915 amends the Pennsylvania Consolidated Statutes to set clear standards for the application of fertilizer to turf and provide for labels and labeling and the disposition of funds.

Senate Bill 863 defines “recreational campgrounds” in order to provide campground owners with certain rights, similar to the rights of hotelkeepers, and help protect their businesses.

House Bill 752 removes the current price per acre restriction on Game Fund money used for the purchase of land to be used as game lands in a Second Class County.

Senate Bill 934 requires the Department of Human Services to include the inspection of all smoke detectors in their annual inspection of child care facilities.